First Broken window (for Zac or Grandpa? Not yet determined 🙂 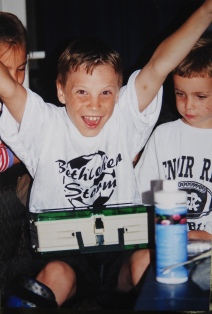 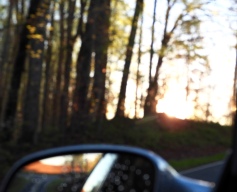 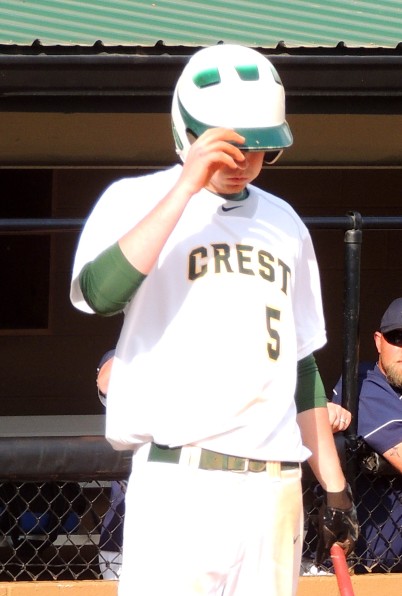 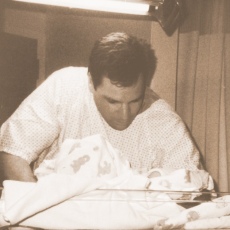 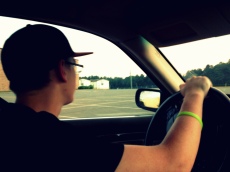 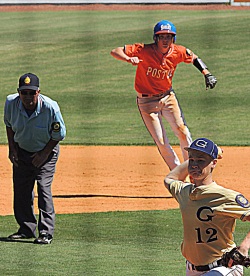 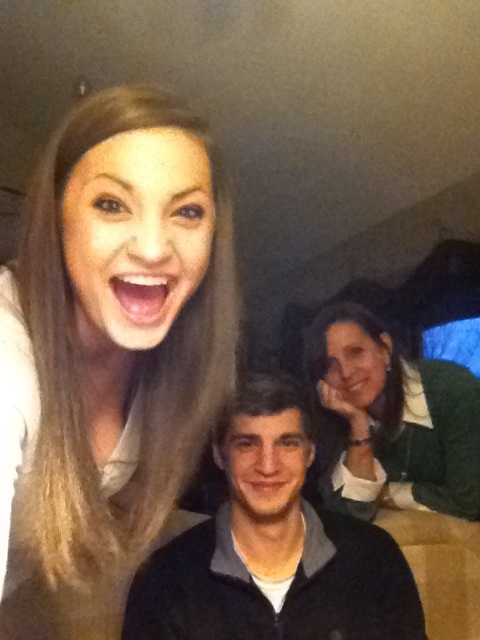 Tanner showed me a link this morning that showed a virtual rollercoaster. He was excited about it because he loves riding rollercoasters, but because of his heart condition  (CPVT), is unable to ride them anymore. At least he now has an option with a virtual ride.  In a virtual ride, he can stop anytime he wants to. Not so with the real deal.

And it got me to thinking about my love of rollercoasters, and one of my absolute favorite scenes in a movie. I saw it for the first time in the Fall of 1989. Here it is:

I distinctly remember seeing the movie for the first time. I remember weeping like a baby and having a difficult time regaining any sense of composure after seeing “Parenthood”. I also remember wondering what the heck my problem was. I  mean,  I wasn’t even a parent. Why was this bringing up so much emotion in me?

Well, at the time, I was pregnant with my first child and hadn’t told a soul. I had a gut feeling that I was pregnant, but hadn’t yet confirmed that I indeed was going to have a baby.

I think my heart and body knew what my mind yet didn’t, and it was pouring out of me in a messy display of saltwater tears in the movie theatre….and then in the car…and then for a walk on the beach where the new father-to-be who didn’t know he was a father-to-be was wondering what in the world my problem was. (Not having told a soul included not having told him. )

Well, that was almost 29 years ago. We celebrated our anniversary last week. (Actually, truth be told, we celebrated our son’s birthday which happens to fall on our anniversary, and we determined a future date when we’d get away a bit to celebrate. ) But in the close to 3 decades,  I’ve learned a thing or two about “Parenthood”. And Rollercoasters. Yes, I’ve definitely learned a lot about rollercoasters, and I’m thinking the sweet and wise grandmother in (Steve Martin’s character) Gil’s world knew what she was talking about. And more than ever, I love a good rollercoaster ride. Most days anyway.

We’ve had the ups and elations from a child’s first steps to walking the college graduation line. We’ve had victories of sports championships, and defeats of not making the team. We’ve had emergency trips (including 5 casts in one year…..foot, collarbone, elbow, hand…all in one year. Thankfully, not the same child!….that’s what we get for having a house full of quite active boys.) I joked that we should have an Xray wall of fame…

We’ve survived awful hair cuts and broken noses and acne. Oh, and the years that gel was really in…that was a tough one. We’ve survived spats and arguments, and even an afternoon when 5 boys were in a fight in the yard. Yep…one by one they went in to stop a fight that became a 5 brothers brawl. We did. We survived. And the sister who innocently (this time) witnessed it all thrived that night because it was the only night in the history of the Halbert family that any children went to bed without supper…5 that night…. and their sister got to stay up late and eat ice cream and watch movies while they went to bed very early and bemoaned their decision to fight. Yep, that was the last five brother brawl.  (That I know of anyway…) I consider that the lesson was learned…the hard way of course. We seem to be good at learning the hard way at times!

We’ve thrived in sweet vacations to the mountains and sunny times at the beach. We’ve lived vicariously through the many varied travels and ventures of the now grown siblings. We’ve prayed through many a sleepless night, and been thankful when a not so compliant teenager made it through the door. We’ve had victories of amazing awards and scholarship and also moments of defeat. We’ve spent sweet time fishing and walking at the river and sitting on the deck. We’ve thrown more baseballs and basketballs than I can count and have had at least 4 broken windows as casualties. We’ve experienced deep heartache and lots of joy. Yes the rollercoaster of our lives has had lots of ups and downs and unexpected twists and turns.

We even experienced a ‘play’ of our own. It wasn’t quite as bad as in the Parenthood scene when Gil’s son was going in to save his sister and destroy the set, but it did involve a very young enthusiastic four year old who was standing on the back row. (When I saw that they had put him on the top back row, I said “Uh-oh” out loud…) Part of the actions of the song involved twirling, and upon the second twirl, our four year old disappeared and fell off that top back row.  I quickly and quietly ran down the side aisle to rescue the little crying and defeated aspiring actor and he didn’t quite feel like reentering the stage again after that. There were lots and lots of smiles and laughs that night as a result of things not going quite the merry-go-round as planned way.

We’ve lived through nightmares and dreams, and a lot of the in between.We’ve had ‘out of the blue’ emergencies  including a heart attack, fire, and car accidents.  Our lives are probably not much different than yours. Maybe in the circumstances and events, but in the experience? …well, I’m thinking we all know what it’s like to ride this rollercoaster of life. It’s called being alive. Fully alive.

As I get older, sometimes I fear the dips a bit more…I mean, I know what to expect…have experienced loss enough to know how hard it can be. Lows are lows…and the dive down can sometimes feel so helpless. It’s one thing on a 3-minute ride, it’s a whole other thing when you see you and your loved ones slipping and falling and have no control on turning things around. But being together for the ride sure makes it a heck of a lot easier. Even in the toughest moments.

I’m thankful Tanner reminded me of the rollercoaster this morning. I’m thankful for being able to pull up the scene and watch it again (and again) and be encouraged by the wise grandma who could see the beauty of the ride. I’m thankful that I can laugh and cry through it each time, (but that unlike the first time I saw it, I can regain composure pretty quickly. ) I’m thankful for the acceptance that life can be really messy. But I’d rather have messy real than polished put-on. I’d rather have rollercoaster real, than forced around and around “Safe” but so guarded merry go round. Part of living involves stepping into the unknown and using what we have. It involves being vulnerable and trusting and having faith in the unseen. It involves being willing to sacrifice the short term pain for the long term gain.  It involves moving beyond complacency and living according to convictions.  Living well can definitely feel like  a rollercoaster ride.

I’m reminding myself today to not get too comfortable. To still be willing to ride rollercoasters. To be willing to grow and change and be vulnerable. To keep dreaming. To not fear the future for me or for my kids, who are so not kids anymore. They are riding rollercoasters of their own (which I often vicariously ride…) One just stepped out to take his start-up company to NYC. He flew there on Monday and is stepping out to live his dream…with all of its many ups and downs. One is about to graduate high school…and is not quite sure which rollercoaster to get on. Others are students or in jobs of their own or both…and are definitely rollercoaster riders rather than merry-go-round travelers. So thankful for the joys of the journeys for sure. And for the growth and tenacity that comes in the not so fun moments.

My hope above all is to know that no matter the ups, no matter the downs, there is always solid ground in my Lord. Always. He doesn’t change. He’s the steady One along for the ride, the Stabilizing factor, the Constant, the All-things-work-for-the-good-Orchestrator in the midst of an often-times wild ride. I look back on my life in amazement, thankful for the lowest dips as well as the highest highs because there’s amazing benefits in it all. Like a beautiful painting with shadows and light, the highs and lows add to the beauty of the big picture, the Grand Design, if  you will. Here’s to rollercoasters, and people along for the ride…But more than anything, here’s to knowing that God is a constant in a ever-changing world that is full of ups and downs. He loves with an everlasting love, and that can make all the difference in the ride. It sure has in mine.

So, maybe my heart knew what my mind didn’t that first night when I saw the scene in the movie “Parenthood”. Maybe I knew the journey ahead would be full full full of emotion. Of ups and downs. Of tears and lots of laughter. Maybe I knew that it was going to be hard and terrifying and great. And it has. And it will be. And even knowing all that I know now, I’d still choose the roller coaster over the Merry-Go-Round. Most days anyway.

First Broken window (for Zac or Grandpa? Not yet determined 🙂

“But you, Lord, are a compassionate and gracious God,

slow to anger, abounding in love and faithfulness.”

“For the Lord is good; His mercy is everlasting and His truth endures. “

“The LORD appeared to us in the past, saying: “I have loved you with an everlasting love; I have drawn you with unfailing kindness.”