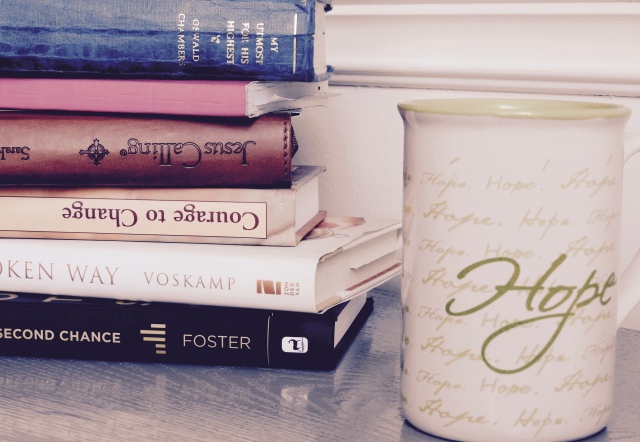 So this past week, I was really convicted about something.

So here’s the thing that struck me. We use the word “convicted” a lot and that’s all well and good, but logic follows that if we are convicted, we are a …(here it comes) convict.  A convict?  Yep, a convict….one who is convicted of something. Not the verb, the NOUN.  Now THAT word has a bit different connotation. It also has lots of visual imagery of prison bars and jail cells and men in orange jumpsuits. And it struck me that if we (I) say we (I) are convicted without moving into the rehabilitative phase after the conviction, we (I) stay a convict.  Yikes. We stay stuck. I stay stuck and choose to inhabit a prison of sorts if I (we) don’t learn from the conviction, the guilty feeling, the conscience speaking and move beyond it.

It was always a no-brainer when dealing with my children. I mean, if they are truly sorry for something, the behavior will change, right? As a mom who loves them, I needed to help them to learn and turn. Learn from the behavior (with not so fun “lessons” via time out, restrictions, etc.) and Turn. I expected that from them and helped them see the reality of what would happen if they stayed stuck. Loving them and wanting good things for them helped me see and act with clarity and resolve. (Most times, anyway.)

Do I do the same thing with myself?  As an adult, I’m amazed at how much I can rationalize things. That’s so not good. The “no big deal” phrase and cultural norm can keep me stuck. If I feel truly stuck in something, convicted, convinced of sin or a lack of wisdom, I will own it.  If I own it, I will hopefully change the behavior, transform the thinking, move beyond the being stuck, imprisoned and convicted, to being rehabilitated, changed, free.

And it takes honesty. And it takes work. And it takes not listening to what the world says about things and truly listening to, seeking out, and bathing my heart and mind in the scripture that is the Truth that sets free. And it takes praying through and surrendering and being very honest with myself. It takes shoe leather (or canvas or whatever they make shoes out of these days). It takes action. Determination.

If I were to share the thing that convicted me with a lot of people, so many would say, “Oh brother, that’s no big deal….” ( I hate that phrase when it comes to things of the heart and actions that can free us..but that’s a thought for another day…)   My conviction had to do with priorities,…an awareness that my ‘go-to’ for encouragement and a lift wasn’t ‘seeking ye first the kingdom of God”, but was more seeking others’ words, others’ thoughts rather than me going first to the Source myself. Not a bad thing, but not the best thing.  Christ-followers need to be attuned to when we’re veering from the path, getting a little off track. Because the little steps lead to the big journeys.  And the watering down of priorities can lead to horrific outcomes.  I know that and have seen it and don’t want to live it. Being stuck is no fun.  So many times it can lead to others being stuck too. Not good.

So today, I put my running shoes on. Figuratively and literally as a reminder. I’m doing a little inventory on myself and being honest about my priorities. I’ve gotta pray before I quickly say things or hit “send”. I’ve gotta seek the Source and not put second or third or last things first. I’ve gotta be honest with myself about time and be aware that each day is a gift that can be wasted or used to honor the God I love. So many things are simplified by merely putting first things first.

So today starts with coffee and scripture. And do you know what else it starts with?  A new morning, a chance to start again…a new beginning. It starts with gratitude for being able to ‘learn and turn’ and enjoy the simplicity of lessons learned and new goals set. It starts with a determination to make the most of this beautiful Saturday knowing that this day, this moment will never come again.  But the things I do and the steps I take?  They will lead me. They follow me. And I’m thinking that I want to choose to stay on the simple narrow path that leads to freedom. Yep, I’ve got my running shoes on.  Thankful for being a runner in this race of faith…and that goals with determination lead to destinations. I can trust God with the destinations as I honor Him with my steps. The big ones and the so little ones. They lead. And when the race is over, I want to be thankful for where those big and little steps lead.

“…let us throw off everything that hinders and the sin that so easily entangles. And let us run with perseverance the race marked out for us,  fixing our eyes on Jesus, the pioneer and perfecter of faith.”

“But seek ye first the kingdom of God,

and his righteousness; and all these things shall be added unto you.”

P.S.  Wanna know something funny? I thought this would be a paragraph post. Maybe two. Maybe another goal of mine should be to take a writing course on editing which focuses on “abridged versions”. Yikes. To those who made it to the end, thanks for staying with me!

P.P.S. Just a little note of clarification. The journey I speak of today has nothing to do with earning God’s love at all. It has everything to do to responding to His love though… It’s not about salvation, but sanctification. It’s about the way we run because He ran to us. The way we love because He loved us. The way we live because He died for us. My steps, right or wrong, can’t change His love..But they can lead me closer to Him and further away. Here’s to the moving closer…