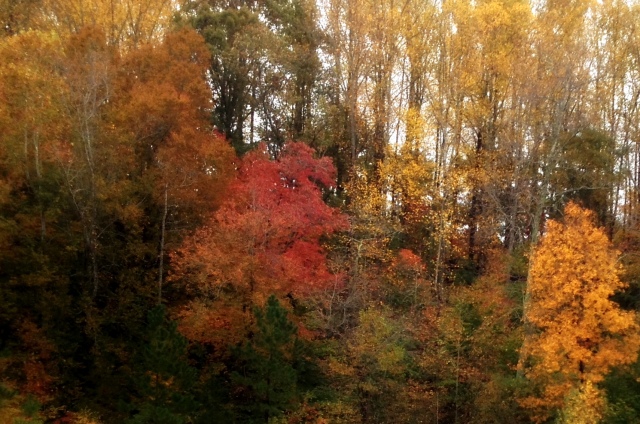 In a little over a week, Autumn will officially become Winter. The leaves are leaving…a few are still hanging on, but most seem to be ending up in places like my sidewalk and yard and deck.  December has come and even though yesterday I was wearing flip flops, now I feel like I should be wearing a parka.  Seasons change, sometimes so quickly. 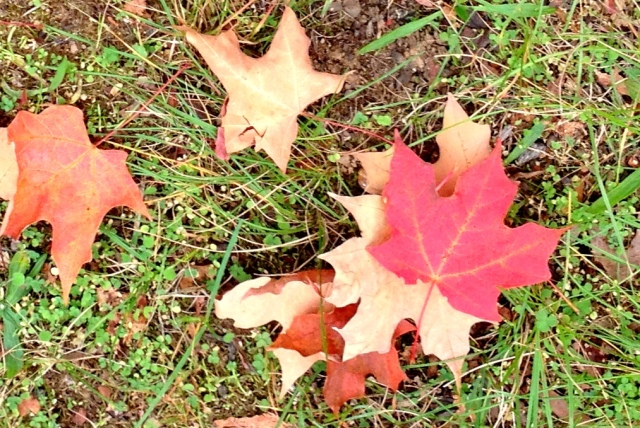 Yes, things can change so quickly. I learned tonight that a woman who we used to go to church with has passed.  She was 69. I didn’t know her well at all, but what I did know was that every single time that I saw her, she made a point to smile  a welcoming smile and make my family and I feel invited.  She loved well. That was obvious.  And I’m sure that those who knew her will have a void, an empty space in their lives as the reality of her passing takes hold.  Her love and inviting spirit just filled people up to the brim.  She has left a legacy behind that is so real, but her passing definitely does leave a void.

Sometimes voids are noticed right away and we can directly attach them to a specific occurrence or event, rather than one that has gradually been built over time.   These voids are the ones that cause our stomachs to rumble, hearts to beat a little faster, voices to scream, and tears to fall. These are the voids that emerge so quickly that we feel as though or worlds have immediately changed. Death. Divorce. Financial Loss. The list goes on and on.  Like a violent wind that sends  leaves flying and branches crashing down, these voids come in like a storm.

But sometimes voids go unnoticed and grow over time. Sometimes voids, those gut-level voids, go unnoticed. Like a slow seep, they gradually become bigger and bigger until we turn around one day and wonder why we’re feeling such a huge sense of emptiness.  The gradual voids of little disappointments, loss, and struggles, add up and chip away at our core, leaving space.  They are kind of like the hollow spaces and gaps underneath the ground that become sink holes later on. Often the source of enormous sink holes that swallow up everything in their path go unnoticed under the surface for a long time, and no one even knows they are there. Sometimes voids are like that.

Either way, voids are voids.  They just are.  And here’s a thought.  Better to have a void, than to have a filler that temporarily fills the space, but ends up creating a bigger void in the long run.

As the Fall turns to winter, the spaces between the trees becomes more visible. 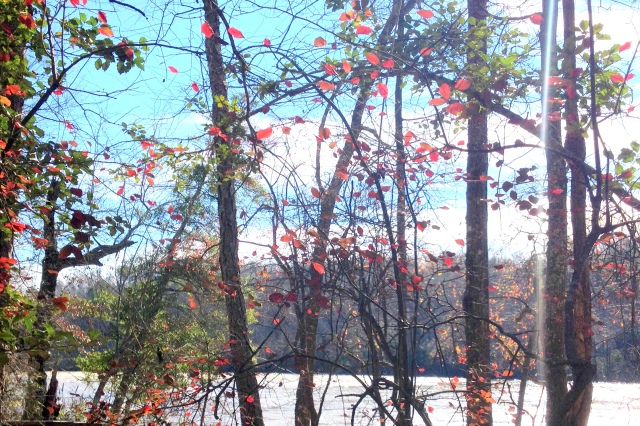 The voids created by leaves fallen are easily seen.  We know that the leaves were  once there, and that they will come again. We can remember the beauty of the emerging lime shades of Spring, deep greens of Summer, and the multicolored hues of Autumn.  But in this season, they are but a memory, or visible only in the browns that crunch under our feet. 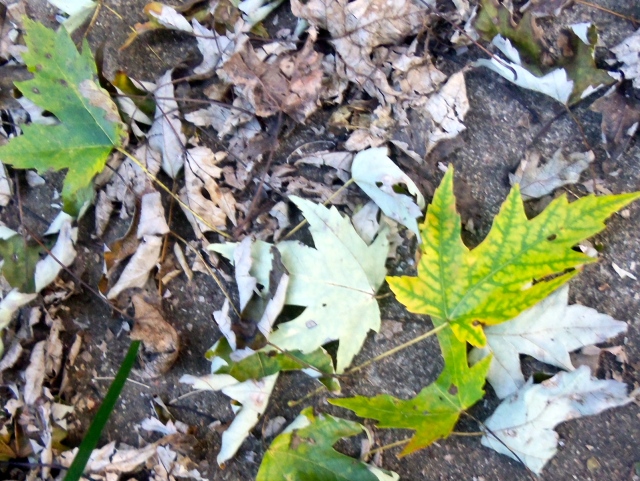 That gradual process  of beautiful colors which began in the Fall comes to an end until the trees are bare,with naked branches in the cold of winter.

It would be a ridiculous thought for someone to try to somehow dress up the barren branches with leaves.  I mean, we know that Spring will come, right?  And with Spring, will come the little teeny, tiny lime green sprouts.

And we know with totally certainty that the naked, bare and grey trees of winter are just in the natural order of things, right?  They are just one season of many. So of course, we wouldn’t try to fill those gaps, those voids, those spaces and empty places with something that was just a mere filler, a counterfeit, artificial filler that wouldn’t last, would we?

But then again, maybe, just maybe, that’s exactly what we do when we rush the order of things.  Maybe sometimes the voids in our lives are there for a reason….for a season. And if we try to cover them up or fill them in or pretend that somehow they are not supposed to be there and rush to fill the empty space, maybe we’re really missing out on the true beauty of the space between.  Maybe the space between can sometimes tell us a little something.  Maybe the ache, the longing can help us take some steps to change things up a bit in our lives.  Maybe voids kind of help us get us back to basics of what needs to be in that space in the first place.  They are an indicator of sorts.

Life is full, full, full of so much beauty.  But on the flip side, life is filled with so much loss. What we do to fill the aches, the voids in our lives during those times of life is like the rudder of the ship of our lives…it leads us. Forward?  In Circles?  Backward?  All of the above?  Yeah, our responses to voids leads us. Somewhere.

Jesus had 4o days in the desert.  Void of food. Void of interactions. Void of any benefits. It was  a time of prayer, resolve. He knew that His ministry was about to begin and that much would be required of Him.  Everything.  He was tempted at that time but would not give in to any counterfeit.  Satan tried.  Here’s bread.  Nope.  Here’s kingdoms. Nope.  Jesus was fully aware that anything filling up the empty space that was not of God would merely be a temporary fix that would only leave much greater voids later on. Jesus knew the value of letting God  use the void to draw Him in a closer relationship to Him.

So, no, we would never attempt to attach leaves to a barren tree. Never. That’s stupid. We know that Spring will come.  But how often in my life I’ve tried to put temporary fillers and fixes in that only make the void more apparent.   Voids that might just last for a season can become a way  of life, when filled with things that only create bigger vacuums. Diversions can all be a temporary fix to a need, but like the rudder on a ship, they lead me.  How often I’ve forgotten that sometimes things happen for a reason,…for a season.  Even if I don’t understand reasons why, I can know that things last for a time.

And another thought.  During those seasons of need, of void, …I’ve been learning in recent years, that a lot of things that happen just can’t or won’t be explained.  Oh people can try to say this and that and offer explanations, but sometimes questions of “Why?” just go unanswered. They just do.  And a whole lot of wasted time and energy can be wrapped up in trying to find an answer to the question why, when on this side of Heaven, a lot of answers just won’t be found or understood.  Lots of things are beyond our comprehension for sure, so like Elisabeth Elliot so often said, “In acceptance lies peace.”

Acceptance of seasons…that there are some things we can’t control, and acceptance of seasons…that some things just take time…is freeing. It’s saying that we don’t have to be it all. We don’t have to be the blooming tree in the season of winter because it’s a season. We can be right where we are and not have to look to the left or right feeling as though we gotta be in a different season. And we don’t have to put in fillers because we know the real deal is so much more valuable and fillers only create more voids.  And when there’s acceptance of where we are, maybe we have the eyes to see the beauty that IS, rather than the voids and what ISN’T. 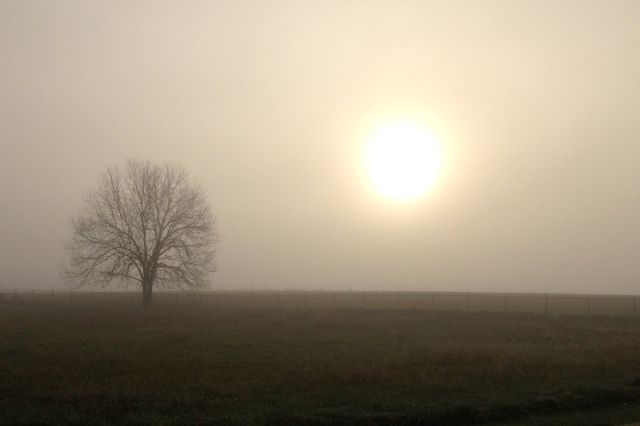 There’s beauty in every season when we have the eyes to see it.  Just a matter of accepting where we are and allowing God to fill the voids in His time.  Funny how needs can draw us to Him.  “His strength is made perfect in my weakness…”  Love that. Because it is.  And here’s an awesome visual.  Light.  Light that fills the spaces, gaps and voids.  FLOODS them, warms them, fills them.  I think that’s what the Lord wants to do in our lives. Fill us up to be poured out.  With light.  With Life.  With Love. With Truth. With Him. Maybe the ache, the season where there are voids and empty spaces are just merely opportunities to be filled to the brim with the power that only comes from Him.

I don’t know what ‘season’ you’re in. Maybe it’s Spring and things are full and awesome and beautiful. Or maybe  it’s summer and steady and fun and sweet.  Maybe it’s winter of Fall or a combination of all of it. But whatever the season, am hoping we can encourage each other with hope, accepting where we are, encouraging us to trust God with where He has us, and have faith to keep pressing on to know Him more no matter what lies behind, or what lies ahead.  Just a few thoughts as the season turns to Winter here and I choose to be thankful for what is…

…and trust that …Spring…Spring is coming.

P.S.  (You knew it was coming ,didn’t ya?So long winded…)  Just a little reminder that there are people walking through all sorts of seasons around us.  Maybe you have a ‘winter’ who needs a reminder that’s Spring is coming. Or maybe you’re in winter and need to give grace and vicariously enjoy the beauty experienced by the friend who’s in the midst of a ‘spring’.  Whatever the season, am thinking there’s grace that can connect us regardless and only add depth to the season we’re in as we remember past seasons, look forward to future seasons, and accept and make the most of the minute that we’re in… ❤

” So, let us know. Let us press on to know the Lord. His going forth is as certain as the dawn. And He will come, He will come to us like the rain. Like the Spring Rain, watering the earth.”

“Wait for the LORD; Be strong and let your heart take courage;

“For behold, the winter is past. The flowers have already appeared in the land; The time has arrived for pruning the vines, And the voice of the turtledove has been heard in our land.…”