Day One.  I arrive in Sweden just before noon and get to see Austin for the first time in ten months. No words for how great it was to see him face to face.  Whether our children are 3 or 23, it seems that just seeing that they are safe and sound and in your sights give a sense of breathing-deep relief and joy.  Pure joy.  We took the train back to Stockholm and I put my bags (and the beautiful flowers he handed me at the airport) in the room where I’ll be staying and then hit the ground running to see the city.

I loved taking it all in.  The big, grandiose, impressive sights like these… 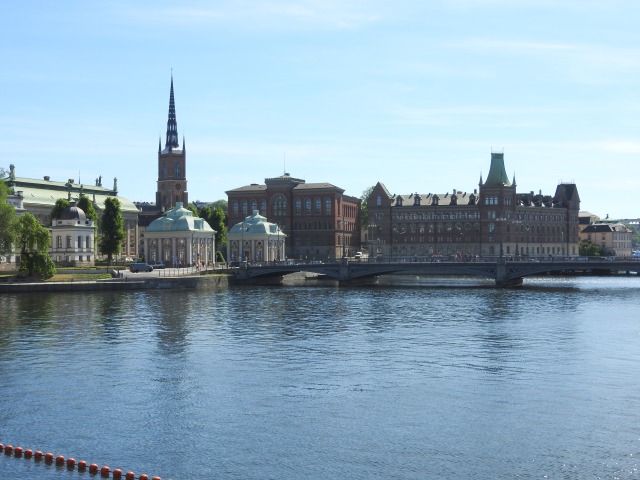 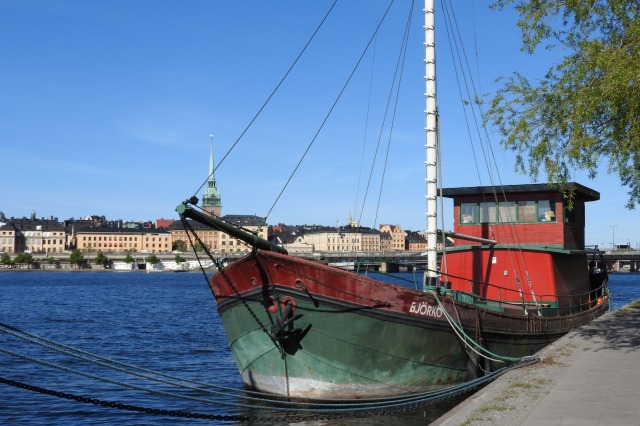 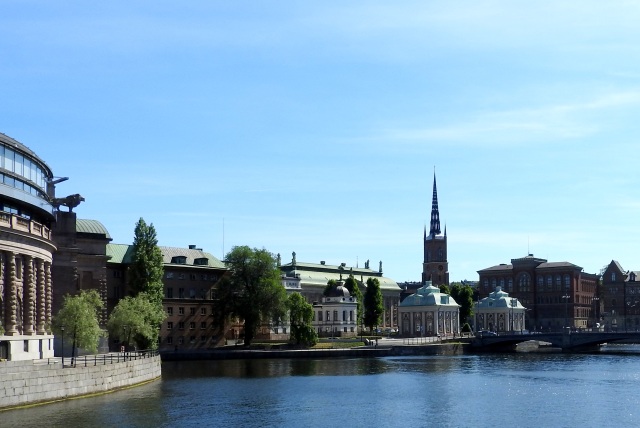 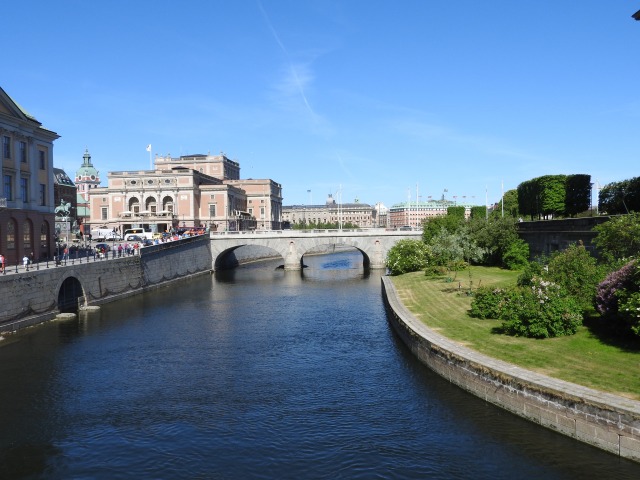 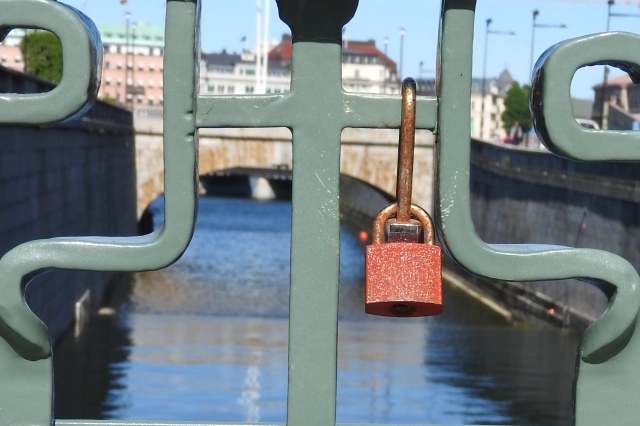 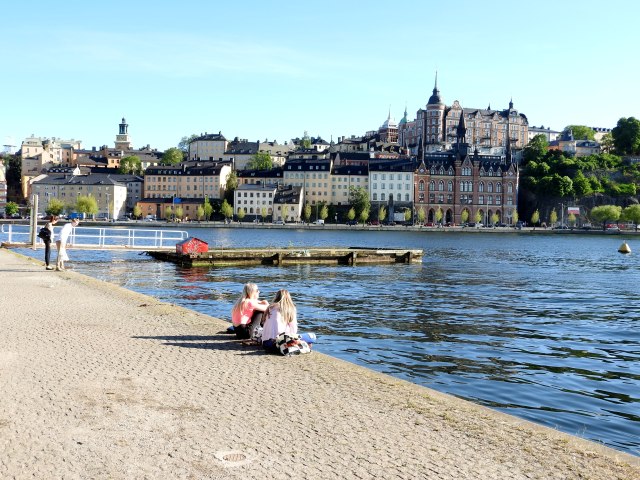 And in the big and the little, I so enjoyed taking in “my view of his view”…Aus loves taking photos probably even more than I do.  Here’s a few of him on day one…because of course, of all the crazy-good things that I was seeing for the first time, the greatest thing was seeing this city that he’s come to love , through his eyes. 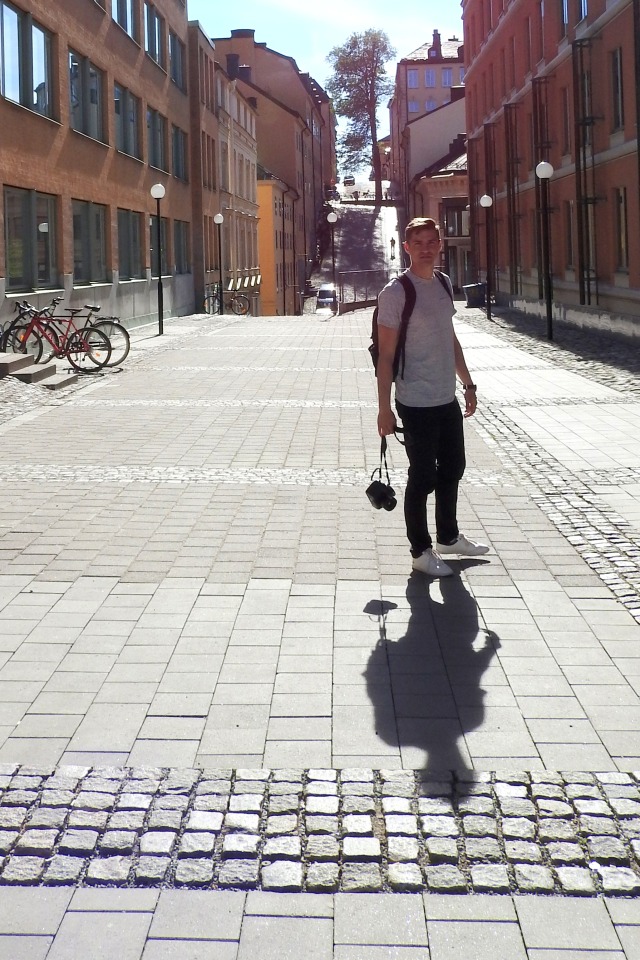 I slept like a rock that night even though the sun doesn’t go down till 10:30 ish and came up at 4 a.m.  Summer days in Sweden are long.  The day began with breakfast on the balcony.  Aus had toasted bread and lingonberry jam, along with French-pressed coffee.  We sat on the balcony and this was our view…

The first stop after breakfast was to go down to the corner store and get some to-go lunch.  We got pasta salad to go and were on our way to the next stop…getting bikes to ride through Stockholm.  We found the City-rent-a-bikes and were on our way!  I hadn’t been a bike in I don’t know how many years, but as a good friend of mine recently said, “where our children go, we go fearlessly.” (Deb).  Yes, pretty-much fearlessly, but some of the traffic stops were a bit congested and I’m sure people were aware of the wobbly start at each stop.  Ah well….we all survived and there’s nothing like riding a bike right smack-dab through a city to help you see it, sense it, appreciate it. And that’s what we did.  We ended up at a beautiful spot by a bridge and ate our lunch there.   There were daisies everywhere.  Have I ever mentioned that daisies are one of my favorite flowers? 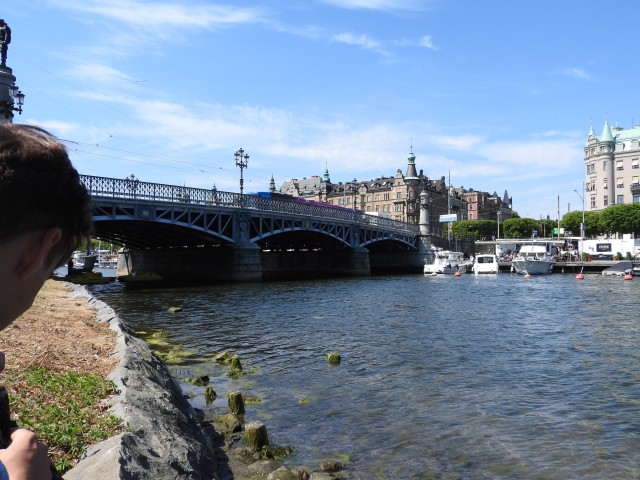 So, we ate lunch, took some photos, and then we were off again on our bikes. Austin had wanted to show me his favorite little coffee shop that was a bit on the outskirts of the city.  It has a huge outdoor seating area looking over the water. The ducks seem to like it there as well. 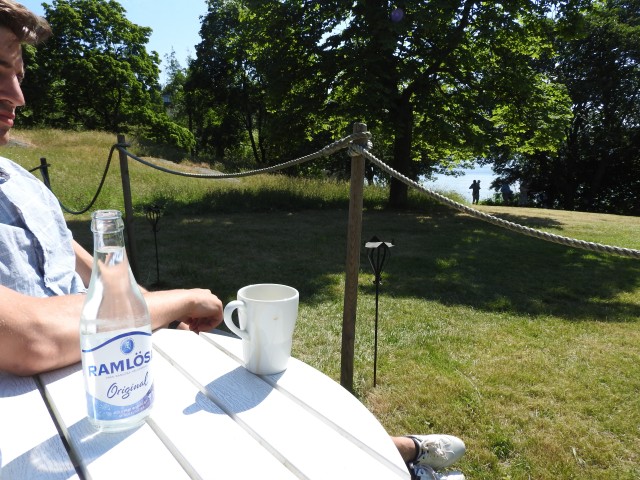 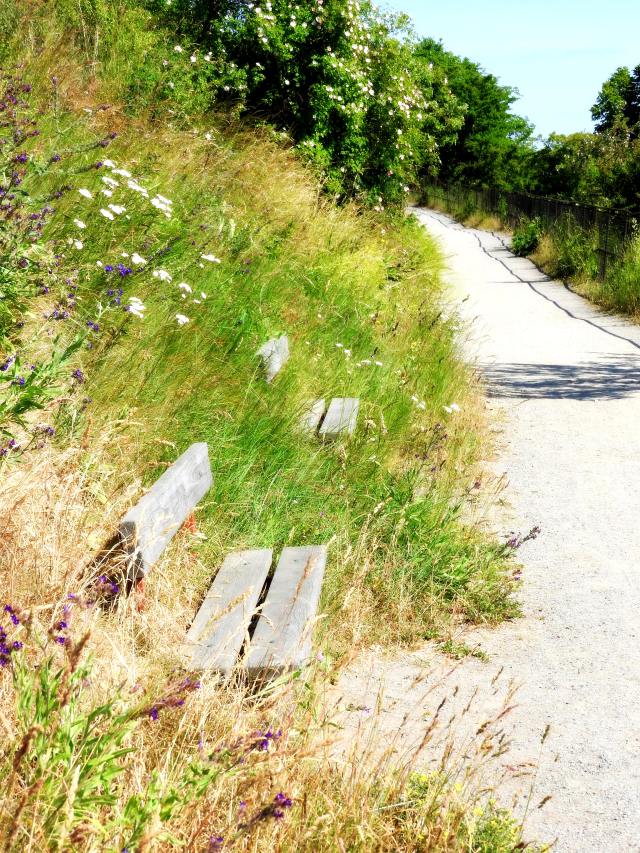 Talk about relaxing.  We had time to catch up a bit on some of Austin’s recent ventures.  He’s had an idea for years that is gaining support and coming into being.  He’s networked with people internationally and was recently flown to Dubai to speak about the project.  So, as I sat and listened to Austin and had a cup of coffee and looked over the water, I kept feeling so thankful for the here and now.  There’s no telling where Aus will be in the coming months, but there is the now and the incredible opportunity to just so enjoy the time and savor the moments for sure. We took more photos and then grabbed our bikes and were off to the next stop…Skansen. 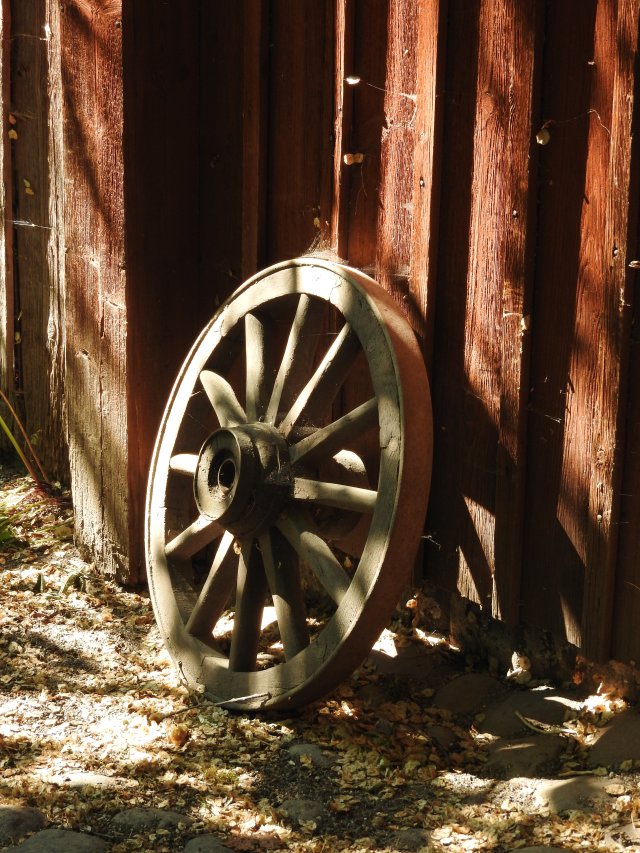 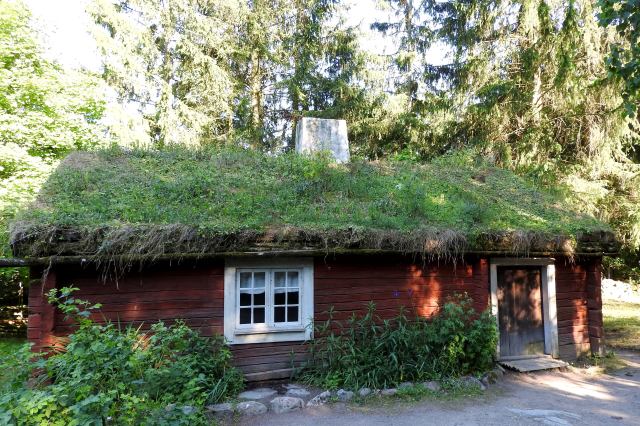 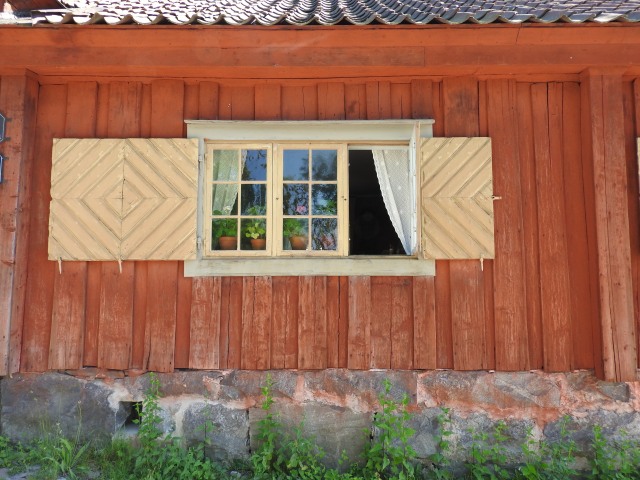 Skansen is a village museum/zoo.  Homes from hundreds of years ago have been taken from all over Sweden and brought to this beautiful site to recreate an old Swedish village to enable the visitors to see what Sweden was like hundreds of years ago.  You can visit the bakery, post office or coffee shop.  We took tons of photos and  then, of course, visited the  bakery/coffee shop.  (We had self-control with regards to the desserts.  I did splurge and add a sugar cube, however!) 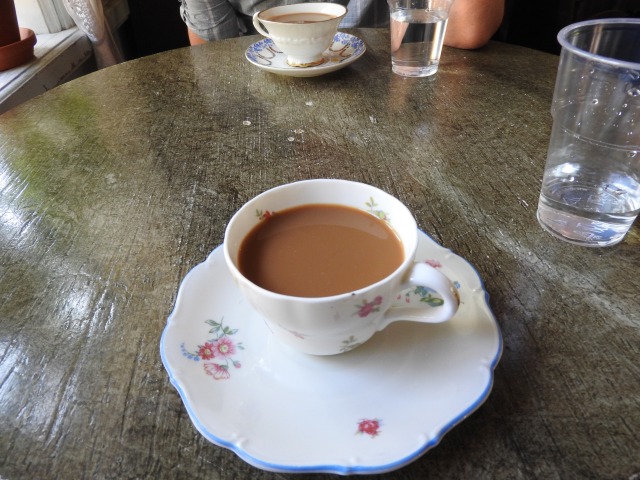 One of my favorite surprises at Skansen was a beautiful garden overlooking the water and the city.  It was breathtaking and breath of fresh air at the same time. 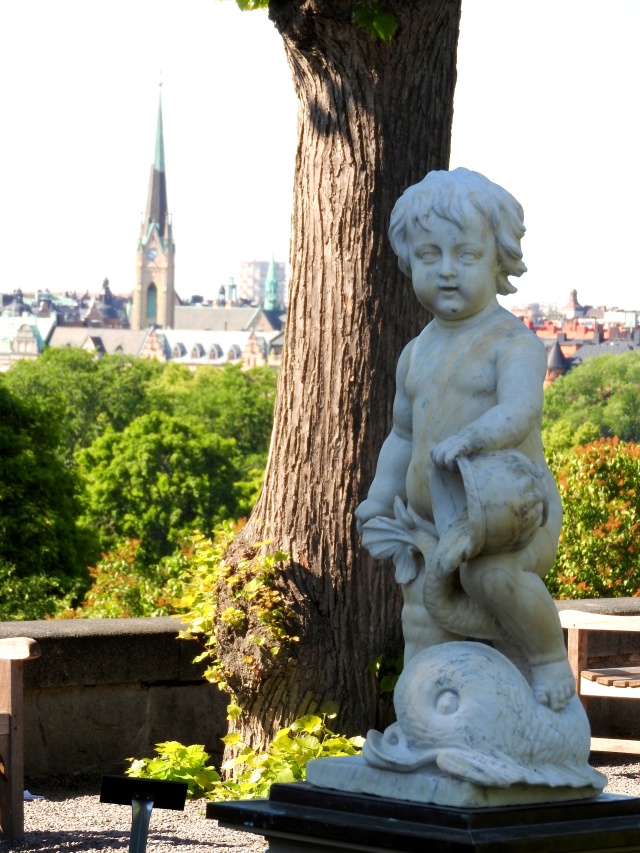 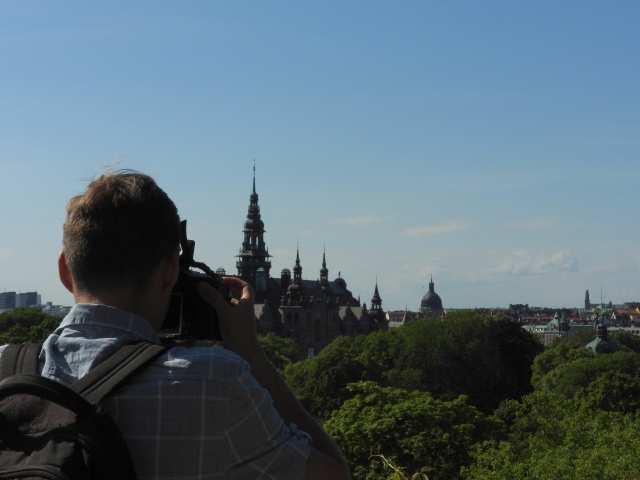 The June flowers were in full bloom, the aroma was amazing, and the sky was clear blue.  We spent awhile in the garden and then turned the corner to see this… 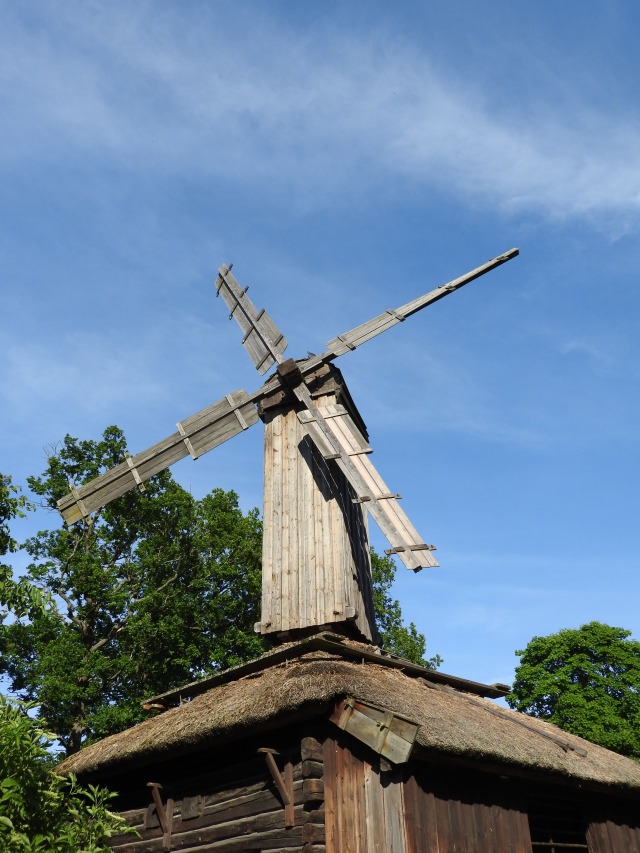 …and the aroma started to change from the fragrance of flowers because just around the corner was the …zoo.

Yes, there were reindeer!  Poor thing was shedding it’s winter coat, so I’m sure it’s had better photo opps but it was so cool to see. 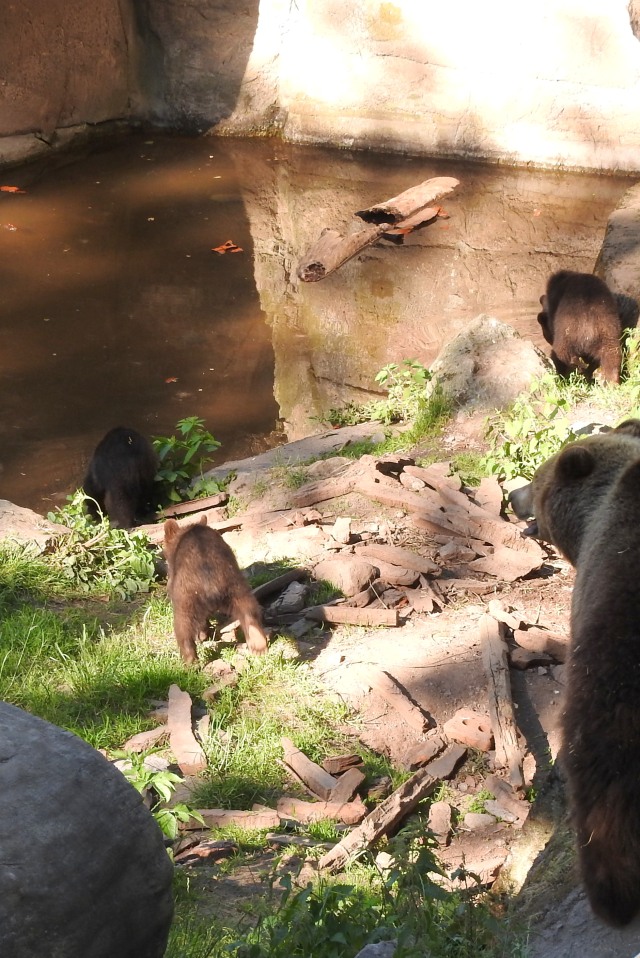 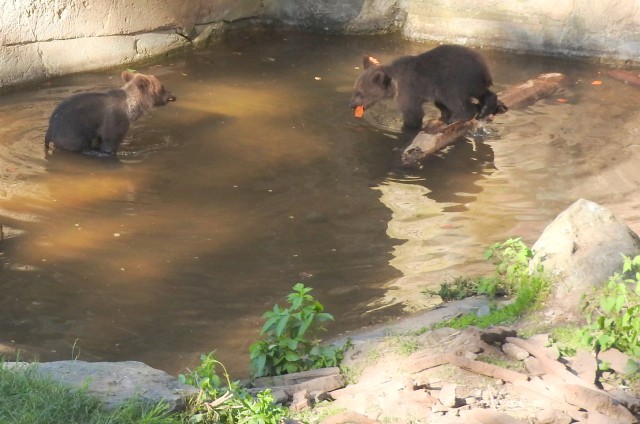 The bears got in a little tussle and I was amused by the mama trying to rally her 3 cubs.  The little guy on the right just caught a fish.   So after the zoo, we continued walking on paths where we found more gardens, more animals (with a very vocal sheep as well as a very loud goose that reminded me of the goose in Charlotte’s Web), and more amazing scenes.

We left Skansen and were very thankful to find our bikes on the bike rack outside of the zoo.  There are tons of bikes everywhere in Sweden, and bike lanes that pedestrians, well…they best stay out of those, for sure!

So we rode the bikes on back into the city, and ended up leaving them on the square that would become one of my favorite spots throughout the week. (It’s beautiful, but I think part of the reason why I loved it so much was because I knew where it was.  It was a home base of sorts!)

We checked-in our bikes and then continued to see the city.  Austin showed me buildings where he had had meetings… 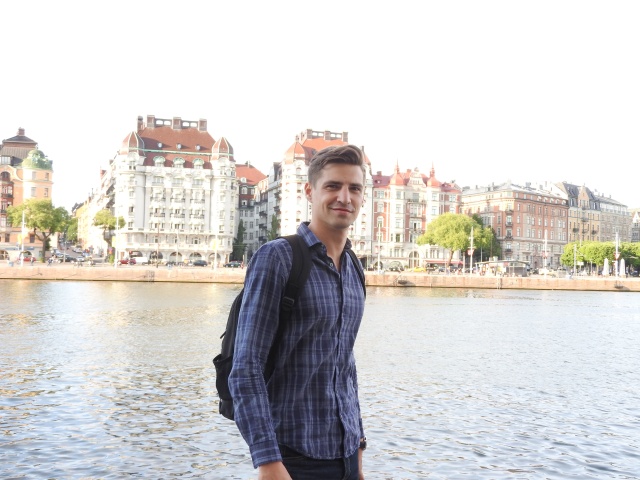 And we continued to walk on the water’s edge.  There were huge antique ships, little boats, and seemingly everything in between.  We ended up taking a ferry back to the part of Stockholm where Aus lives. 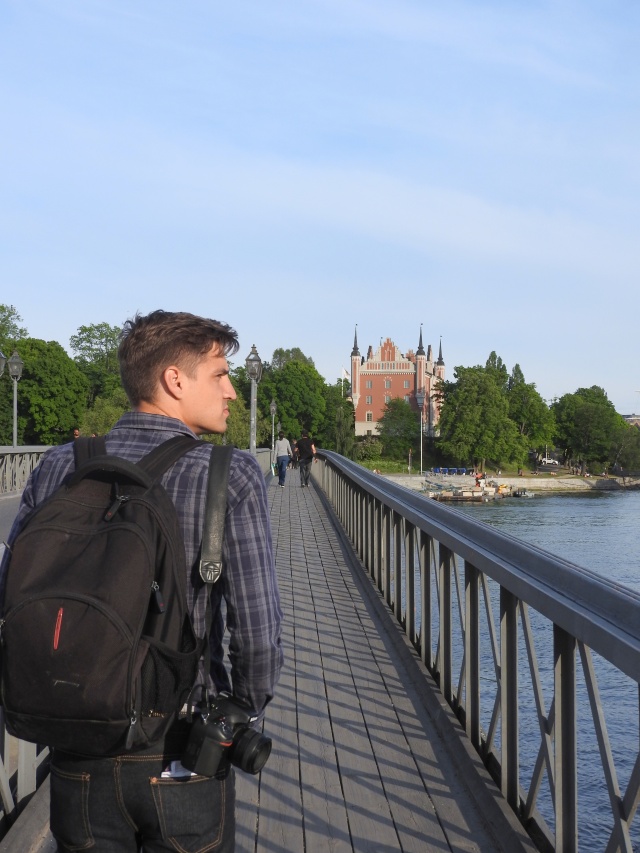 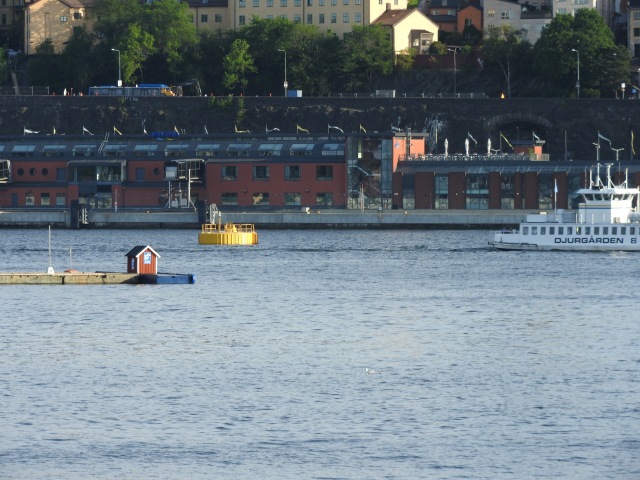 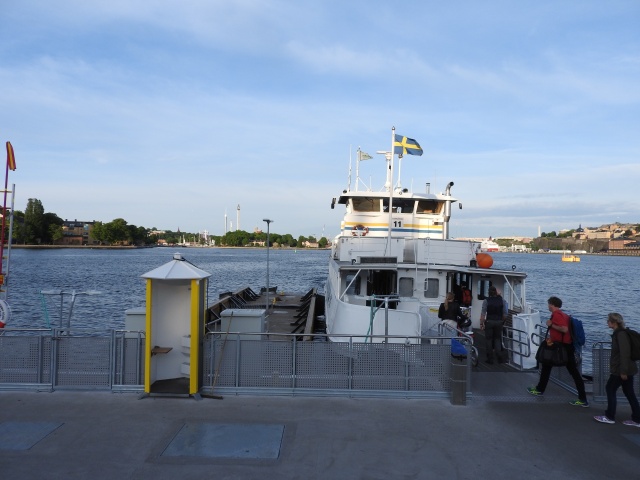 After the ferry ride, we took a bus and were close to home.  I always felt thankful when I started to recognize things a bit.  I love exploring, the adventure of it all, but it’s nice at the end of the day, to get back to where you know you are. 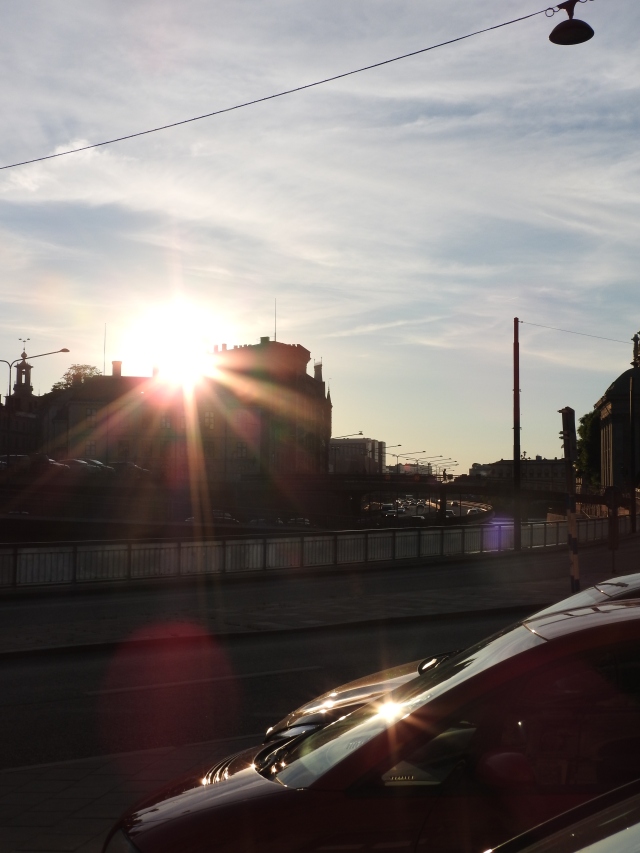 So, the day ended and we ended up back at Austin’s apartment ate dinner with the fun, thoughtful (and thought-provoking) amusing professors that he lives with.  Was a wonderful meal full of lots of conversation.  They realized that we had had a full day of using almost every possible form of transportation-walking, biking, riding a boat, a train, and a ferry, and could probably see that jet-lag was catching up with yours truly.  Even though the sun was shining , my body was definitely saying it was time to stop and rest.  It was around 10…because that sun shines long in Sweden.  My son was shining too, and I’m so thankful for my Aus who was willing to turn tour-guide and help me see parts of his world that I had never seen.  Yes, it was a good day and even though the sun was up, I slept  like a baby.

Well, that’s all for round one of the ten days.  I know there are a million photos and comments…thanks for bearing with me.  I just want to share to remember this time while it’s fresh and to share it with friends and family who could experience the time with Aus in a teeny tiny vicarious way.  So, round 2 will be coming in the next week or so.  Trust me, I have a kabillion photos or so, and still dishes to clean, laundry to fold, and a life to live here.  But it is so incredibly fun to be lifted out and put back in to the beauty, rest and encouragement of those ten days just by looking at some photos. Hope you catch some good glimpses of that beauty as well.

For I know the plans I have for you, declares the LORD,

plans for welfare and not for evil, to give you a future and a hope.

2 responses to Ten Days (part one)