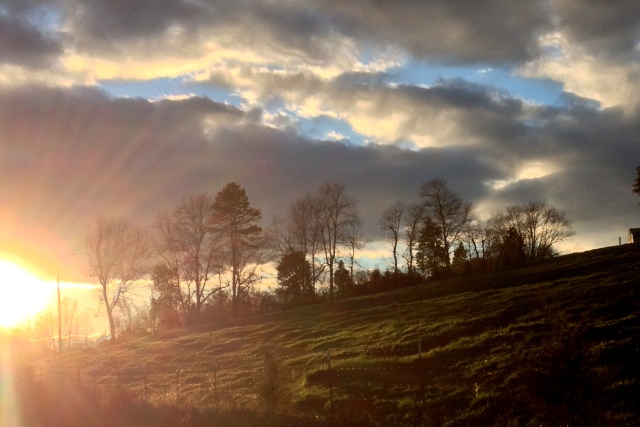 “The Lord is my shepherd, I lack nothing.
He makes me lie down in green pastures,
He leads me beside quiet waters,
He refreshes my soul.
He guides me along the right paths
for His name’s sake.
Even though I walk
through the darkest valley,[a]
I will fear no evil,
for you are with me;
your rod and your staff,
they comfort me.”

I can remember when my children were young, nap time was a necessity for sure, for many, many reasons! It was a necessity for them, and it was a necessity for me. There were days when I thought that maybe we could skip naps because, well, they seemed to be doing alright…but those were probably not some of our best days, for sure! So often, the kids would feel like they didn’t need or want a nap, but as their mom, I knew that if they didn’t get that nap, that little rest, that the rest of the day would probably be a challenge…for them and for me!

So I would make them lie down.  We had our routine. I would read them a story or two, put on their story or song tape, and leave the room.  Many times, I’d have to go flip the tape multiple times, or camp out outside of the room (sitting in the hallway on the floor), so that if I heard them start to get up or play,  I’d encourage them strongly to get back in that bed and rest (Pronto!).  Since it was a routine, most times, they’d lay on down and rest…and then wake up much sweeter than when they had laid down.  They didn’t think they needed naps, but as their mom, I knew better.

Well, I think there are times when God, as our Heavenly Father, causes us to ‘lie down’.  If we’re not spending enough time figuratively resting in ‘green pastures’, or sitting by ‘quiet waters’, well…He calls a time-out, rest, nap time.  Like exhausted children complaining that we don’t need a nap time, He can look at us and say, “Enough…it’s time to rest”…and then, He causes something to  make us lie down (pronto!).” And that’s exactly what I feel like happened to me this week.

“He makes me lie down in green pastures.  He restores my soul.”  I love how the verse says, “He MAKES ME…”  I mean, at first, that sounds pretty harsh.  In our world of rights and independence and “nobody-can-tell-me-what-to-do” mantras, well, it does sound pretty direct to say “He MAKES me”…  Somewhere along the way, we’ve lost our understanding that the world doesn’t revolve around us and our understanding of things.  Somewhere along the way, we forget that we have things to learn, that maybe there’s a better way, that maybe our Creator knows a thing or two more about the world around us and the world within us than we do.  When I do what God says and lie down in that green pasture, what comes next?  He restores my soul.  He doesn’t just restore my body, He restores my soul.  The restoration goes deep. Like a small child emerging from his room stretching and smiling after a restful nap, I am rejuvenated, restored, and ready for whatever is next.

So, as I said, this past week, I had a little situation in which He MADE me lie down.  Long story short, I was having symptoms of what you could find on any heart attack symptom checklist that you google. Heart attack? Yep, I said it.  And I thought it.  And I went to that ER wondering if I was overreacting or under-reacting.  I wasn’t sure.  But I knew something wasn’t right, and I trusted my gut, my prayer, my God enough to know I needed to get to the hospital.  And yep, affirmative…a little something was wrong.  Was it a heart attack?  Thankfully, no. Turns out that being as low as I was on iron can mask as a heart attack (tightness in chest, shortness of breath, back and arm pain…fear…) So, there was a problem requiring me to LIE DOWN…not in green pastures, but on a hospital bed.  And the funny thing is that it may have well been a green pasture, because it was exactly what I needed.  (Turns out my iron was really low and I needed to be admitted to the hospital for  a transfusion.)  Medically, I’ve got some follow-up appointments and all, but spiritually, I’m rejuvenated.  Yes, I was anemic and needed iron.  But along with that?  I desperately needed a little time out, a break, a nap….I needed rest.  And that rest has so “restored my soul.”

I usually consider myself pretty daggone healthy.  The only times I’ve been hospitalized in my adult life, I’ve brought home a baby with me!  But the signs of not being so healthy were adding up, and me?  Me and my stupid-seemingly-healthy-self chose to …ignore the signs.  Yep. Surely they would go away.  Nope.  They didn’t. They got worse and louder and louder until they would be ignored no more. I’m thankful that low iron was all it was because this stubborn sister was playing with fire and didn’t even realize it.  So so many of us are…and that?  That’s why I just wanted to share this post.

It was a gift to be in the hospital, and then to have some days off from my sweet boss who also said “LIE DOWN”.  (Sometimes God uses other sweet and stubborn friends to help give us get back to reality.)So, I actually did lie down.  I read.  I prayed.  I rested and rested and rested.  I received encouragement from sweet, sweet friends who echoed the  demand that I lie down.  And I did.  Like a child who refuses and refuses to nap and then stops in his or her tracks and falls asleep in the high chair, I was kind of stopped in my tracks.  Hopefully, lesson learned.And yes…I chose to lie down…and I feel so soul-restored…

So, I guess I’m writing this as a reminder to myself and to so many of you women out there who are juggling and juggling and juggling and have their eyes so on keeping all of the balls in the air that they lose sight of the big picture of why they’re even juggling in the first place.  Maybe a ball or two (or five) doesn’t really need to be in the mix.  Maybe it’s so not about juggling, or walking a fine line of a tight rope, or appealing to any kind of audience after all.  Granted, I so understand the demands of life and how we have to push forward.  We have to work hard and fight through and be intentional.  But along with being intentional about accomplishing all of the daily stuff, there’s a need to be intentional about refocusing, meditating on why we’re doing it all in the first place. And that? That’s where the green pastures come in.

And our ‘green pastures’ are all different. God made us so incredibly unique.  He calls us to spend time with Him, but He doesn’t dictate what that looks like.  Yes.  Be in His Word.  That’s Life-giving truth. We will spiritually starve without the Bread of Life.  But God made us multi-faceted, incredibly unique and complex creatures who love and are ‘fed’ by different things.  Some of us may have ‘green pastures’ full of music and sound.  Some may have pure quiet.  Some may have quiet places where silence prevails.  Some of our ‘green pastures’ may be outdoors beneath sun and sky, some of ours may be on our knees in the carpet of our bedroom floors. Some of us may have our best prayer time on a jog in the morning.  I love the quote by Eric Little, an Olympian runner.  He says, “I believe God made me for a purpose, but He also made me fast.  When I run, I feel His pleasure.”  Maybe some of those ‘green pastures’ are merely places where we are filled up…where we praise Him and do our thing  and feel His pleasure.  We all have callings in our lives.  I’m convinced that spending time in those green pastures…wherever and whatever they are… will help us figure out what that is.

So here are a few lessons from my being made to lie down in pastures green.

Well, I know this is all stuff that you know and that I ‘knew’, but didn’t properly practice.  I’m so aware that God is working all things for His good and that He is so incredibly involved in the intricate details of our lives.  I love that.  I love that God knows our needs better than we do and that He loves us deeper than we could possibly even imagine.  And last, but definitely not least, that He has equipped us with gifts and talents for a purpose to impact this beautiful world.  He doesn’t just want us to lie down in green pastures to be restored.  He wants us to lead other people to those green pastures as well…to come to beautiful life-giving place of knowing Him and growing in Him and His grace.

So, here’s to devotional time, resting, and time-outs…so that we can emerge from these green pastures restored, ready to face our days with purpose and direction and a rejuvenated spirit.  Here’s to being able to smile from the inside out and pour out into others’ lives because we have taken time to let God’s Word pour into us.  Here’s to taking time to lie down in green pastures before it gets to the point where God has to step in and MAKE us lie down in places that look a lot more like hospital beds, or doctor’s offices than green pastures.  Am hopeful that sharing this not-so-little post might help another stubborn soul out there to stop  before he/she is stopped involuntarily.  Grace and peace can shine through in any circumstance or storm if we tap into the One who gives grace abundant and peace beyond comprehension.  Thanks for taking the time to share in this journey.  Praying this leg of the journey will help us all seek out those ‘green pastures’  in our lives a bit more!

P.S.  I’m sorry…this is such a long post, but I gotta share one more thing.  There’s nothing like that restless child climbing up in a lap and just being held.  It calms, comforts, and soothes all at the same time.  I think that’s the perfect picture of what I see as a ‘green pasture’….being held.  It’s being accepted, loved, and held in the arms of a loving Savior.  Period.  So here’s one of my favorites songs.  If you don’t get anything else from this post, I hope that this song deeply encourages you, and rejuvenates you in ways that only a loving Father can.     Just Be Held ~ Casting Crowns