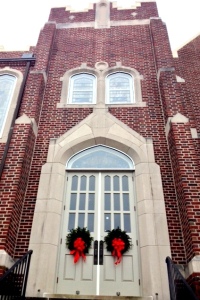 Stone upon stone, brick upon brick, the church has opened it’s wooden doors to countless souls throughout the years.  Yesterday, one by one, many walked up the steps, through the wooden doors, signed the guest book, and sat down on the antique wooden pews in the sanctuary.

To remember.  To Grieve.   To Celebrate.  To acknowledge.  To be a firm foundation for those who have lost a loved one. A dear friend’s husband has battled with illness for years.  He lost the battle on Monday.

The day was pretty dismal outside.  Gray clouds could be seen and although the rain was pending, there was a cold December mist. I was running late, but as I rushed up the sidewalk and came to the steps of this old church, it struck me of what a “firm foundation” it had.  It looked so stately there, but with a personal touch of the wreaths that welcomed folks in.

It got me to thinking about how we so need a firm foundation to stand when the storms come, don’t we?  Loss, whether it be personal or financial, emotional or material, momentary, or long-term, is real.  It has real effects.  Strong foundations come down.  So again, like I say so often to myself, to my kids, to those I love,…we need each other.

As I prayed for my friend in her time of grief, I got a real picture of Moses during the Exodus.  He had to hold his arms up during a battle, for when he let down his guard, the Israelites would start losing and as he raised his staff, they overcame.  Here’s the verse from Exodus 17:12:

“When Moses’ hands grew tired, they took a stone and put it under him and he sat on it. Aaron and Hur held his hands up–one on one side, one on the other–so that his hands remained steady till sunset.”

So, they won the battle.   It was a group effort on so many counts.  Aaron and Hur saw the need, and gave a firm foundation (the stone for Moses to sit on), and lifted his arms. Was it easy?  Battle never is.  Never, by nature of the definition of battle, can it be easy.  The Bible doesn’t say anything about Aaron and Hur’s arms getting tired, but I’m sure they did as well.

Being there for someone takes effort.  It takes determination.  It takes strength.  But oftentimes, when we make that effort, we realize that the very ones who may be holding us up are holding us up as well.  Encouragement can often work both ways.  It did yesterday as I sought to encourage the ones grieving and walked away with tears feeling encouraged myself.  You see, we all have our own battles.  And the beauty is, that often when we reach out to encourage others, we can find a new courage in ourselves because again, we are not alone….and the connectedness that comes from reaching out to another, connects us as well.

The church that stands there so strong? It’s a mere building.  But the foundation that has kept the doors open for years and years?  It’s a belief system that puts Christ as the cornerstone.  Hope is not in and of ourselves, it is the One who loves us and won the ultimate battle over sin.  But He didn’t have anyone to hold up his arms.  He was even forsaken by God the Father as He could not look on the sin that His own son was to bear.  But the ultimate battle?  It is won.  Thank the Lord, it is won.

So as we face our own battles, some small and momentary, some life-changing and tragic, may we remember that we know the end of the story.  Victory is for those who are in Christ Jesus.  Because of Christ Jesus.  Christmas is about a gift not just for the season, but for Eternity.  And that gift allows us to HOPE when battles rage.  It allows us to be TENACIOUS when loss invades our secure worlds.  It allows us to KNOW that grief is temporary and JOY is eternal.

So, if you’re facing a battle, let some folks in. We need each other.  But more than anything, trust God to be with you in the Battle, and ask Him for the grace (which gives power) to stand.   To determine to stand with arms raised in worship to the One who can Win the Battles.  Christ Alone.  And somehow worship wins battles that fighting in other ways just can’t touch.  Acknowledging that He is our foundation, our hope, our strength…that gives a bit of perspective and courage in the midst of whatever we may face.

That knowledge allowed folks yesterday to sing and look on loss in a different light.  It allowed them to come together and laugh with tears in their eyes instead of merely grieving the intense loss of a life that ended with some dreams unrealized.  But those dreams fade in the Light of Eternity.  They just do.  And we can grieve with Hope knowing that this is so not the end of the story.

Below is a link of the song, In Christ Alone.   Love it and the Truth that STANDS the test of time…